Wired magazine has posted an interesting article about the movie adaptation of Neil Gaiman’s [Coraline](http://www.traileraddict.com/trailer/coraline/trailer).

It’s the stunningly inventive DIY visual effects that director Henry Selick (The Nightmare Before Christmas) used to bring the story to life. A quarter-million pieces of popcorn are transformed into cherry blossoms, superglue and baking soda are whipped into snow, and black fishing line becomes creepy chest hair.

The [entire article](http://www.wired.com/entertainment/hollywood/multimedia/2009/02/pl_screen) is on the Wired blog. 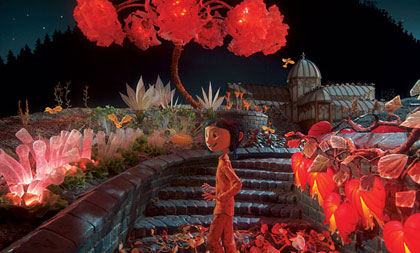 Many of the plantsâ€”which flutter for a hummingbird’s attentionâ€”were formed out of plastic mesh. Their radiant stamens include fiber optics. Three seconds of footage took three weeks to shoot.

Set dressers had to adjust these vines to avoid “retinal rivalry”â€”a feeling of nausea triggered when an object in the extreme foreground is viewed in 3-D.