Superman promises to be realistic

An alien infant is raised on Earth, and grows up with superhuman abilities. He sets out to use these abilities to guard his adopted world. — IMDB 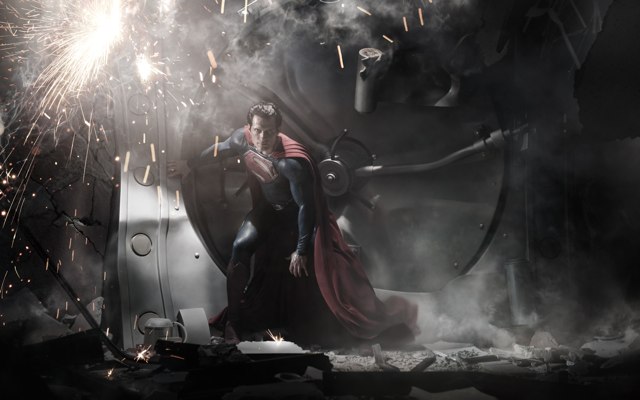 Ever since George Reeves donned the cape on TV, I’ve been a fan of Superman.

In 2013, we’ll see Man of Steel, a reboot that promises to bring a darker edge to the character than previous movies.

Zack Synder will direct Man of Steel. The story is by David S. Goyer and Christopher Nolan — who collaborated on the stories for the Dark Knight films. It’s Nolan’s influence (he’s also producing) that many think lend the film the same realism felt in the Dark Knight trilogy. Having said that, I’m looking forward to Zack Snyder’s rendering of the story. Snyder is probably best known for Watchmen and 300.

Due to his success with the Batman franchise Christopher Nolan was brought on to help develop the reboot of Superman along with screenwriter David S. Goyer. This was merely as a creative consultant, it was never intended for Nolan to direct. When Zack Snyder was later brought on as director, Nolan chose to hand all creative control over to Snyder and focus on The Dark Knight Rises. – IMDB”

NME writes that at the Rome Film Festival, Goyer said: “What Christopher Nolan and I have done with Superman is try to bring the same naturalistic approach that we adopted for the Batman trilogy. We always had a naturalistic approach, we want our stories to be rooted in reality, like they could happen in the same world we live in.”

Goyer revealed that “this doesn’t necessarily mean we will make a dark movie”, but insisted that it does stop the script being “cartoonish”. He explained: “Working on this reboot, we are thinking about what would happen if a story like this one actually happened. How would people react to this? What impact would the presence of Superman in the real world have?”

To date, there have been five Superman movies made so far. Three of them were sequels to the iconic 1978 film Superman The Movie, directed by Richard Donner with Christopher Reeve as Superman.

I remember being enticed by the tagline, “You will believe a man can fly.” Then being amazed when the film lived up to the promise.

In 2006, Bryan Singer directed Superman Returns. I thought it was great! Brandon Routh did a great job. It would have been a challenge to live up to the role that had been owned by Christopher Reeve. A challenge which, in my opinion, he pulled off.

Man of Steel is scheduled for release on June 14, 2013 and you can watch the trailer below.