I did the morning stuff and caught the shuttle bus to the Airport and set about trying to find the right platform going to Amsterdam Centraal.

When I booked my flight, I had bought an Amsterdam Card which entitled me to some free transport, discounts on museums and a free canal cruise.

Eventually, I found the right platform and boarded the train.

As the landscape scrolled past, I noted how so many of the buildings were blocks – rectangles and squares – no round corners anywhere. No roundabout streets, no cul-de-sacs .. grids.

It reminded me of Lego 🙂

Turned out I missed my stop or had got on the wrong train. So I ended up having to go back a few stops. 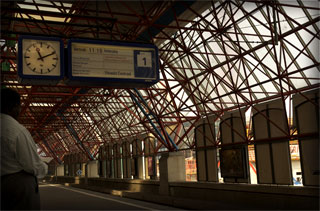 Amsterdam Centraal was a jammed with throngs of tourists walking in s-shaped patterns as they tried to find their way around.

I found my way down into city and looked for a place to grab a morning coffee and some brunch – I had spent 2Â  hours on the train.

I had a toasted ham and cheese sandwich.

As I walked along the Rokin Strasse, I noticed one of the attractions on my map – The Amsterdam Dungeon. I thought it would be a laugh, so I joined the queue. 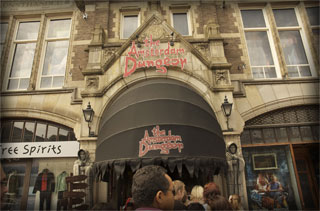 It turned out to be good but predictable.

I then checked out Madame Tussauds wax museum. Took a photo with Kylie Minogue, Sean Connery and DJ Tiesto 🙂 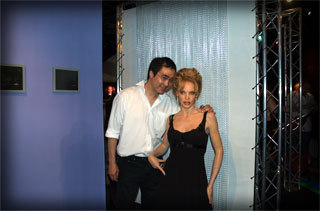 Dinner was Pizza and a Heineken .. it was damn good!!

Ofcourse, no trip to Amsterdam would be complete without checking out the Red Light District.

As I walked down the dark narrow alleys, I noticed most of the curtains were closed. Of the ones that were open, I’ll just say .. none failed to impress.

By then, it was time for a nightcap coffee and the train ride back to the Airport. Where, once again, I ended up sitting on the wrong platform.

I had been sitting on 15a – as directed by the ticket collector mind you – when a Spanish lady asked me if this was the one for the Airport. I said it was .. then added with a smile … “At least, I hope it is”. She translated what I’d said to her family or friends who waddled in after her as she sat next to me.
We sat.

Then another Spanish gentleman came running up the stares shouting and waiving.

The lady said “Come.” waiving her hand to me, palm down with rapid repetitions ..Â  in the universal manner where you feel like it’s your mother hurrying you along ..Â  and we sped walked after him.

We reached the train in time, climbing the stairs to the upper part of the carriage, she glanced back at me … we smiled at each other with that “we made it look” in our eyes… and found our seats.

Back at the hotel now.

Tomorrow the plan is – Van Gogh Museum, Anne Frank’s House and see what time is left… my flight leaves at 20:20.