I stayed up too late last night… 🙂

I woke up and blinded myself as I opened a crack the curtains to check the weather… stumbled into the shower.

Time to get up, check out of the hotel and see stuff!

Got into Central Station just before lunch. Had a coffee and went off in search of Anne Frank’s house.

It wasn’t huge, I saw the lot in about 30 minutes.

Man, those Dutch love a museum! 🙂

Then it was off to find Anne Frank’s house. Unfortunately, the map I had on me didn’t show where it was. So I wandered around for a while and took some photos. Trying to soak in the sights – the old cobblestones, the thin buildings that lean towards you.

The leaning is by design so that the hoist hooks didn’t swing in and damage the buildings when goods and furniture were loaded in and out of the houses.

After about half an hour of aimless meandering through the streets of Jordaan, I bought a map.

When I get there, the queue was quite long and the day was a scorcher. Anyway, it was worth it I thought. From an historical perspective, her diary is a scary insight to life as a Jew in a German occupied country. 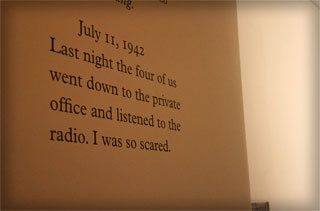 It makes one realise how much most of us lead such easy lives. Comfort and peace we take for granted.

Then I hopped on Canal Cruise down to the Van Gogh museum, just behind the Rijksmuseum.

I took loads of photos as the cruise boat wound it’s way through Amsterdam. The boat houses with their varying designs but ubiquitous pot plant gardens. The hoisting hooks jutting out from the roofs of the old leaning houses. The low bridges, with their black, wrought iron hand rails .. thin and twisted in an kind of Art Nouveau style.

The rhythmic drone of the cruise boat provided background music to the passing patterns of the brown, mossy brick of the canal walls. The brown, silty water lapping sharply against the bricks contrasting with the softer, thlop against the hull of the boat.

Just yesterday I had sat on the edge of one of the canals, watching the rain drops line up along the railings. 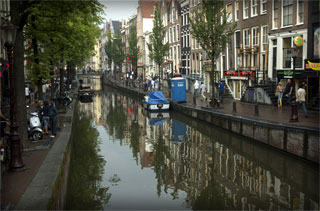 View of a canal in Amsterdam

The Van Gogh exhibit was awesome. I bought the audio tour thing and listened as the paintings were explained. It was huge. I didn’t have time to see all of it – so I’ll have to go back 🙂

I get back in time to have some really delicious pizza – ham, pepperoni, sausage and mushroom. Thick style crust but heated up in the oven so that the bottom is just crispy enough to a little crunchy .. but not hard.

Then it was time to board. Join the huge crowds, more queuing through 2 sets of customs … then back in the Piccadilly line to Leicester Square … up through Chinatown and back to the flat.

What a place. I want to go back as soon as possible … so much cool history and a great relaxed, welcoming vibe.