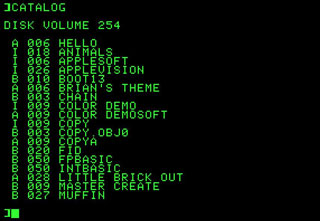 Here’s a trip down [memory lane…](http://blog.wired.com/apple_os/)

Wired presents a gallery of the Apple OS from DOS 3.3 (see screenshot) to Mac OS X.

I remember my first experience with Apple was an Apple IIe compatible. In those days, PC manufacturers were allowed to copy other people’s products.

My father was importing Apple clones from Taiwan. That lasted about a year before Apple decided not to license it’s OS. That meant no more Apple clones. So, we switched to importing IBM PC clones – XT compatibles.

After … what… 10 years of using IBM PC clones, I re-discovered Apple. I was doing onsite tech support and most of my world was PC-DOS. I could see Apple had great technology but they were priced out of my pocket. That was before I learnt about the term “Return on investment”.

Thanks for the link [Brett](http://www.brettclifton.com)

← Why is anyone still using Internet Explorer? Yo, check out da Honda … yeh →