When asked about the Blade Runner sequel, Ridley Scott said:

It’s not a rumour — it’s happening. With Harrison Ford? I don’t know yet. Is he too old? Well, he was a Nexus-6 so we don’t know how long he can live [laughs]. And that’s all I’m going to say at this stage.

What’s even more exciting, is the possible link between the worlds of Blade Runner and Prometheus. I’ll talk about that later.

When I think of science fiction, I imagine advances in many things, including – scientific, technological and cultural aspects of human life. It’s natural to associate ‘advance’ with positive change. So it’s interesting when science fiction challenges that idea with dystopian visions of the future.

Blade Runner (released in 1982) is one of those movies. The film takes place Los Angeles 2019, where genetically engineered humanoid robots called “Replicants” are manufactured by the Tyrell Corporate – a mega company named after it’s founder Eldon Tyrell.

Replicants are sold as slaves to work on off-world colonies. Their use on Earth is banned. Replicants who defy the ban are hunted down and “retired” by special agents known as “Blade Runners”.

The story focusses on a group of renegade replicants hiding in Los Angeles. A retired and jaded ex-Blade Runner, Rick Deckard (Harrison Ford) reluctantly agrees to take on one last assignment and hunt them down.

Loosely based on the novel Do Androids Dream of Electric Sheep by Philip K. Dick, the movie is directed by Ridley Scott — who had previously directed the sci-fi horror, Alien.

Sci-fi movies have to show us a vision too. What will things look like in the future? Blade Runner is visually stunning, I’m a big fan of Ridley Scott’s way of shooting a scene. Particularly his use of shadows to create tension. Scott started in set design and that attention to detail is apparent in every scene of Blade Runner.

The futuristic feel is enhanced by a beautifully electronic orchestral score by Vangelis. You might also remember the theme to Chariots of Fire? 🙂

How does Blade Runner tie into Prometheus?

A Reddit user found an Easter Egg wherein a memo from Prometheus’s corporate villain, Peter Weyland, hints that his mentor was Eldon Tyrell, the head of the Tyrell Corporation in Blade Runner.

The Prometheus Blu-ray and DVD is coming out soon. You can pre-order it from your favourite store right now.

The memo talks about a rival who “ran his corporation, like a God, on top of a pyramid overlooking a pyramid of angels. Of course, he chose to replicate the power of creation in an unoriginal way by simply copying God… I always suggested he stick with simple robotics instead of those genetic abominations he enslaved and sold off-world, although his idea to implant them with false memories was, well …’amusing’, is how I would put it”. — Herald Sun 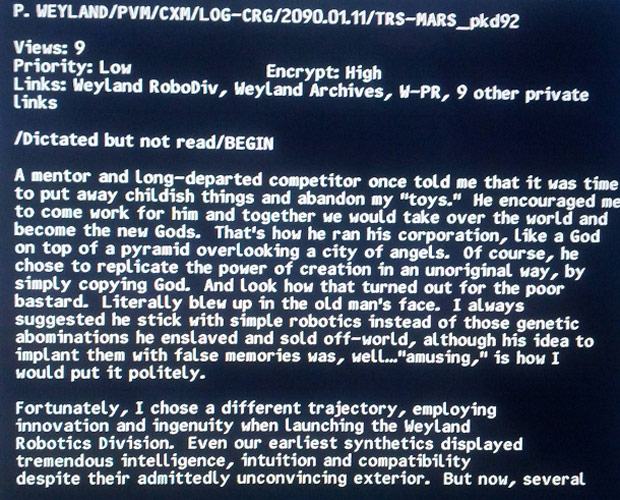