Changing the face of movies…

Steve Perlman is now putting the finishing touches on Contour, a futuristic camera system that will add photorealistic three-dimensional effects to digital entertainment. 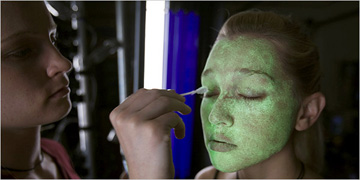 *Actors must cover themselves with makeup containing phosphorescent powder for the Contour, a system that can create 3-D effects. – Photo by Austin Hice.*

Steve, former [Apple Computer](http://www.apple.com/) engineer who previously co-founded WebTV Networks and the set-top box firm Moxi, works out of his garage with a small team of software and hardware engineers. He rewired the garage to handle the power requirements of the lighting system and a small graphics supercomputer that was built from scratch.

> The Contour system requires actors to cover their faces and clothes with makeup containing phosphorescent powder that is not visible under normal lighting. In a light-sealed room, the actors face two arrays of inexpensive video cameras that are synchronized to simultaneously record their appearance and shape. Scenes are lit by rapidly flashing fluorescent lights, and the cameras capture light from the glowing powder during intervals of darkness that are too short for humans to perceive.

> Mr. Perlman, who helped develop Appleâ€™s QuickTime video technology, said the computer-generated animation techniques pioneered by Pixar Studios were reaching a visual plateau and, as a result, losing some of their audience appeal.

Despite being relatively low cost, the system delivers much greater detail that has applications not only in cinematography but in video games.

> That phrase was coined in the 1970â€™s by Masahiro Mori, the Japanese robotics specialist, as he sought to describe the emotional response of humans to robots and other nonhuman entities. He theorized that as a robot became more lifelike, the emotional response of humans became increasingly positive and empathetic â€” until a certain point at which the robot took on a zombie-like quality, and the human response turned to repulsion. Then, as the robot becomes indistinguishable from a human, the response turns positive again. Critics were quick to point out the eerie look of the characters in â€œPolar Express.â€