I just had one of the best Chinese meals I’ve ever had at the Sham Shui Po district. 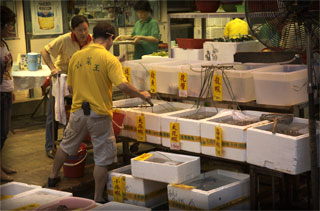 Friends of the family (Michael, Daniel and CK) were kind enough to show me around most of the day, starting with Yum Cha.

We then walked around the Tsim Sha Tsui and Mong Kok areas to shop. Whilst most tourists stick to the Nathan Road area in Tsim Sha Tsui, there are far better deals in Mong Kok and it’s only 5 minute ride on the local train.

Nathan Road is 27 kilometres long and has over 3000 shops. 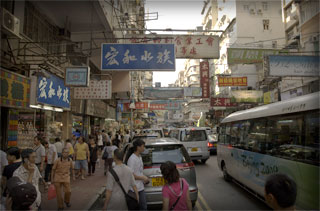 Whilst shopping around, I priced an unlocked iPhone at HK$9870 which didn’t seem like much of a saving from Australian prices. The HK$ to A$ is about 7.4 at the time I’m writing this. Although, I probably could have bargained that down. Still, knowing that the next software update would likely disable the ‘hack’, I decided against buying it in Hong Kong.

I did stop in the HMV store though and bought some DVDs and CDs. Again, the price was close to those in Australia but they were not yet available in Australia. So, I thought I’d grab them whilst I was there.

After a rest and coffee at Starbucks, we drove to Sham Shui Po and looked for a place to eat. It was about 6:00pm and already one of the restaurants was fully seated. We chose another.

We had 4 dishes – Cow tripe stir fried with shallots, ginger and chili. 1000-year-old-egg with watercress and omelet. Then another kind of tripe and egg – all crispy on the top and soft on the inside. Finally calamari stir fried with rock salt and chili. Washed down with beers and tea at the end.

On the way to the airport, CK stopped at a lookout to take some photos of 2 bridges – the Tsing Ma bridge (second longest bridge in the world) and the Ting Kau bridge. Awesome! 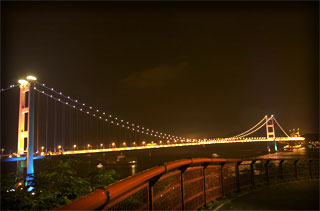