I’ve always wanted to see a real castle. So today I caught the train to Arundel Castle.

From Victoria station, you’ll need to change trains at Chichester or Bognor Regis.

After a reasonably quick train ride … about an hour from Victoria Station, I arrived at Arundel station.
The castle is about a 10 minute walk from the station. There’s a small town around the castle with some really quaint little shops.

“There are nearly 1,000 years of history at this great castle, situated in magnificent grounds overlooking the River Arun in West Sussex and built at the end of the 11th century by Roger de Montgomery, Earl of Arundel.

The oldest feature is the motte, an artificial mound, over 100 feet high from the dry moat, and constructed in 1068: followed by the gatehouse in 1070. Under his will, King Henry I (1068-1135) settled the Castle and lands in dower on his second wife, Adeliza of Louvain. Three years after his death she married William d’Albini II, who built the stone shell keep on the motte.Â  King Henry II (1133-89), who built much of the oldest part of the stone Castle, in 1155 confirmed William d’Albini II as Earl of Arundel, with the Honour and Castle of Arundel.”

It was amazing to think that was walking around a castle!

The huge stone walls, the beautiful gardens. All reminding me how young Australia really is. 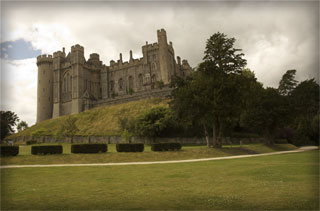 Despite the romance associated with castles today, I think it’s worth remembering that they’re basically fortresses. So everything about the architecture is designed to keep the enemy at bay. In those days, the weapons were swords, spears and crossbows. Later on, catapults would be invented to throw a projectile over great distances without the aid of explosives.

One thing that stands out in my mind was seeing a pearl necklace owned by Mary Queen of Scots. Also on display were the rosary beads she had when she was beheaded … after being imprisoned by Elizabeth I for 19 years.

I also read the death sentence notice for Thomas, the fourth Duke of Arundel. He was executed for high treason. His crime, plotting to marry Mary Queen of Scots as his fourth wife.

The castle is full of historical artifacts – art, armour, books. I was awed by the detail in everything – paintings, draperies, even the weapons had ornate inlays.

The castle has magnificently decorated architecture. Walls supported by flat buttresses. The narrow winding stairwells lead to wall walk around the keep which provide stunning views of the surrounding countryside, the coast, the town and the Cathedral.

Corridors decorated with hunting trophies, pole arms as well as beautiful paintings and showcases with jewelry and other art of the time, open out onto massive rooms – dining rooms, the chapel, a huge hall whose roof is amazingly high. Contrasting with the quite narrow staircases and low roofs. Very Gothic.
After the castle proper, I also visited the Fitzalan Chapel – which is on the castle grounds. Founded in 1380 by Richard, 4th Earl of Arundel as a collegiate chapel served by secular canons. The major artistic interest are the tombs of the Earls of Arundel and the Dukes of Norfolk.

The castle closes at 5pm. So, to really see all of it, I’d recommend getting there early in the day. Unfortunately, I only had 2 hours there which meant I had to rush the tour. There’s a restaurant there which I would have liked to have tried.

Afterwards, I wandered into the town and had an early dinner at The Tudor Rose. I had a sirloin steak with chips, peas, mushrooms and tomatoes. All served piping hot… as in you can’t actually start eating when it’s arrives at the table. I finished with an Earl Grey tea 🙂

Then, it was back on the train to London.