I was reading [this article](http://www.wired.com/news/technology/0,71248-0.html) on Wired and it reminded me of the [Massive Attack](http://www.massiveattack.co.uk/) concert I saw. 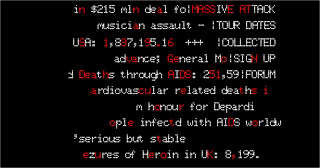 At the concert, behind the mixing desk, were two guys with laptops writing code. When they did so, things changed on the screen behind that band. For example, there was text made up from large pixels – like signage on a highway and the picture above.

They also hide a live feed from their website so website visitors could send messages to the audience at a given concert.

At another stage, the dots became smaller and resolved to form an image like the one below: 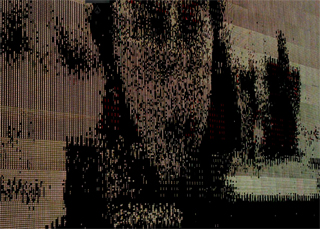 That was video, this is more about sound…

The story talks about “[livecoding](http://en.wikipedia.org/wiki/Live_coding)” … where the artist / programmer writes software on stage which manipulates sound to form music in real time. 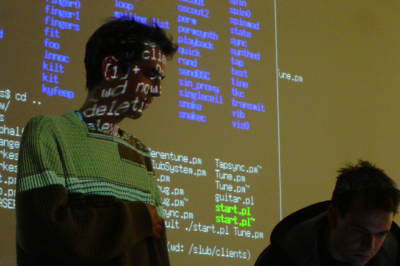 > Alex Maclean, a U.K. livecoder and art student, said he traded in his guitar when he found he could be more creative with code than with strings. He touch-types using Perl at raves and dance clubs, creating a unique visual and musical experience. Sessions with drummers, MCs and other livecoders can be reminiscent of traditional free-jazz improvisation.

It’s a great article with lots of links to artists and, in particular, the international consortium called [TOPLAP](http://www.toplap.org/) which stands for “temporary organization for the proliferation of live audio programming” and has 200 members.