Left Canberra to Hong Kong via Sydney. I transferred flights in Hong Kong – where they had free public wireless Internet access at the airport, now that’s how it should be! 🙂

The flight to London was on Cathay Pacific airways. The food was surprisingly good on the plane. Things have changed since my last overseas flight – all the seats have screens in the back to watch movies. There’s quite a library of movies, tv shows and even games – the back seat also has a controller for selecting shows or playing the games.

I watched Definitely, Maybe – which stars Ryan Reynolds, Elizabeth Banks, Rachel Weisz, Isla Fisher and Abigail Breslin. I really enjoyed it, mainly because it’s about a father explaining his impending divorce and past relationships to his daughter. It reminded me of Angela.

In the ‘Arthouse’ category was Dan In Real Life – with Steve Carell and Juliette Binoche. A widower finds out the woman he fell in love with is his brother’s girlfriend. Also a ‘rom com’ which was pretty good.

The rest of the flight I spent dozing or flicking between TV shows and listening to music on my iPod.

I arrived at Heathrow airport at about 6:00am and was met by an Addison Lee taxi driver that Reading Room had booked. He took my to the flat in Soho where I would be staying for the month I’ll be in London. 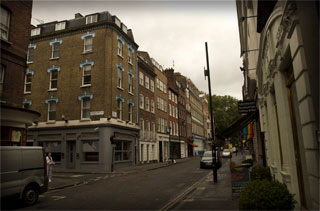 The flat in Soho

I settled in and called Simon – a co-owner of Reading Room who met me for coffee.

First thing I had to do was find the Apple Store and get a power adaptor! … Found the massive store in Regent Street. Very cool. The salespeople have portable credit card readers. You can simply type in your PIN for payment instead of going to a cashier counter. 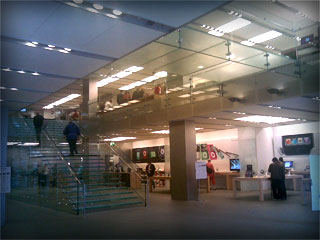 I was lucky to arrive when the Pride festival was on in Soho. The streets were packed that night was I wandered around. 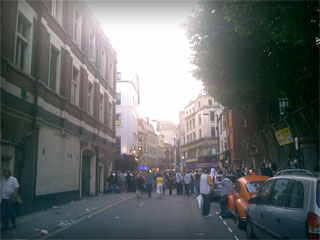