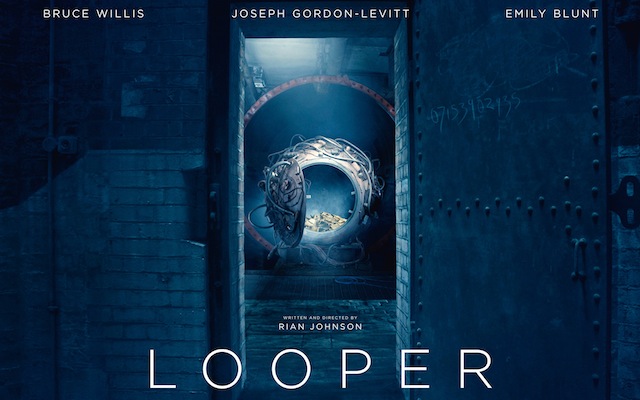 In 2072, when the mob wants to get rid of someone, the target is sent 30 years into the past, where a hired gun awaits. Someone like Joe (Joseph Gordon-Levitt), who one day learns the mob wants to ‘close the loop’ by transporting back Joe’s future self (Bruce Willis).

Set in the year 2044, Looper explores that age old paradox – time travel. The idea is interesting and is sure to attract most sci-fi fans. As it did me.

The premise, “we can alter the future by changing the past” is assumed to be true in Loopers.

So we meet Joe, who’s a Looper â€” basically an assassin â€” who the mob recruits to get rid of evidence.

Apparently, in the future, surveillance technology makes it too difficult to dispose of a body. However, illegal time travel solves that problem – ship them off to the past.

All is going well with Joe until it’s his turn to “close the loop”. It turns out that being a Looper, while lucrative, has a limited career span. Eventually, a Looper’s future self is sent back to be killed by their younger self. They are then free to live out their lives in whatever way they see fit.

Why? Who knows, just don’t argue or they’ll send all the other Loopers out to get you.

Overall, there’s some great action and cinematography. The script is well paced and humorous in parts. Not hilarious, but funny.

The film feels real to an extent that sci-fi can be. I think the ‘realism’ is achieved by subtle production design and CGI. Perhaps like Mad Max meets Blade Runner minus the rain.

The plot had a great premise, but in the end I was left feeling that it all seemed a littleâ€¦ pointless.

There wasn’t enough character development to feel invested in the characters. The acting was good though, so I suppose they did the best with what they had.

It’s worth seeing but could have been better. Maybe it’s meant to have a sequel so we learn more about the characters and the origins of why time travel is illegal.