It’s 10:15pm Paris time. I left London at 4:25pm (London time). It’s only just getting dark now. Like London, the sun sets much later than Canberra.

I booked the train and hotel online using Eurostar. They had a ‘deal’ which bundled the return train and 2 nights accommodation plus a ticket on a tour bus where I can “hop on / hop off” as needed.

At the train station -Â London St Pancras, I had a coffee and croissant – the waiter was French and I hadn’t even left London yet! Collecting my ticket was easy – there are machines that look like ATMs. I simply inserted my credit card and it spat out the tickets.

After a 2.5 hour train ride from London, I arrived right in the heart of Paris, the station is Paris Nord.

On the train, I watched the countryside go by. It reminded me of The Great Escape .. rolling hills, wide skies .. the occasional village .. there was invariably the steeple of the church that stood out. I took photos out the window as the landscape sped by.

Next to me was, was what I assumed to be a French man – pink Lacoste shirt, reading a newspaper in French. In front of me were 4 young English girls. The had small bottles of some pink alcoholic drink. Their conversation getting louder as time went by and the alcohol took effect.

Over to my right was a young French mother with 3 young, noisy children. They looked like they were aged between 2 and 6. The eldest seemed polite as he struck up a short conversation with the 4 English girls – they were nice to him .. asking him the usual “How old are you? what class are you in at school?”.

I put on my iPod and listened to Weather Report (their classic Heavy Weather album), Dido and Faithless.

The train sped along its way, my ears popping each time we entered a tunnel. I napped for about 15 minutes before waking up and soaking in the scenery speed past.

When I arrived atÂ Paris Nord, the first thing I needed to do was change some money and find the hotel. I went to a currency exchange desk and said “I want to change $100 Australian dollars into French currency… I had forgotten it was all in Euros. The lady proceeded to process my credit card then pulled out $100 Australian dollars! .. So, I had to explain that I wanted Euro, not Australian money. So I think I lost a little during the exchange but she was kind enough to waive the commission.

Then, I had to find the right platform. The train station is huge and everything is in … French 🙂

Before I left London, Rebecca at Reading Room was kind enough to give me some bus/train tickets – she said she travels to Paris fairly regularly. How kind is that?!!

So, putting on my best French accent – thinking that would make it easier for them to understand me – I proceeded to ask the information desk where I should go to get to La Defense. As it happened I had to change trains along the way.

So far, everyone is surprisingly polite and helpful. I had expected the stereotypical rude arrogance the French are reputed to have.

After a reasonably short train ride, I arrived at La Defense. I found the way out – Sortie – and found myself surrounded modern buildings – post modern in style with glass curtain walls exposing the insides of the buildings. I was like a scene out of a science fiction movie like … like I Robot or Minority Report. 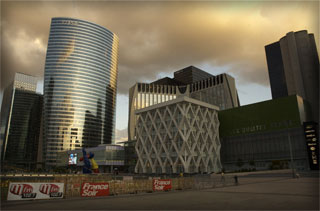 So, I wandered around taking some photos … thinking “I hope the hotel is close. What should I do .. ask someone? catch a taxi?” … then, as a walked further down the Esplanade de La DÃ©fense, I noticed the Sofitel was within walking distance! Whew!

So, here I am in the plush hotel room thinking about dinner and realising that I’d forgotten to print my bus tickets whilst in London when I had access to a printer. I called reception and “ofcourse” they have a printer I can use.