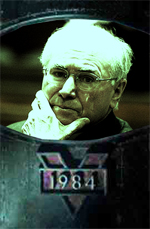 After deciding it’s good to lock innocent children in a concentration camp. Then fostering racism through absurd immigration laws. The government has turned on it’s own people.

The Sydney Morning Herald has published [an informative article](http://www.smh.com.au/articles/2006/04/02/1143916406540.html) on a law passed last week that “allows the Government to read private emails, text messages and other stored communications without our knowledge”.

> The power extends to innocent people, called B-parties, if they have been unlucky enough to communicate with someone suspected of a crime or of being a threat to national security.

> Under the Telecommunications (Interception) Amendment Act, the Government will be able to access communications not only between the B-party and the suspect, but also between the B-party and anyone else. If you have unwittingly communicated with a suspect (and thereby become a B-party), the Government may be able to monitor all your conversations with family members, friends, work colleagues, your lawyer and your doctor.

> The Government may be able to use the information even though the information is not related to the original suspect. It also does not have to tell you that it has been listening in. While there are some remedies if you have been illegally monitored, these are pointless if you do not know you have come under surveillance.

> This is of even greater concern given how easy it is for ASIO to gain a warrant. The gatekeeper is not an independent person such as a judge, but a politician, the federal attorney-general. As long as ASIO has tried other means of tracking a suspect, to gain a warrant it need only show that intercepting the B-party’s communications is “likely to assist” in obtaining intelligence “related to security” – vague terms providing scope for the misuse of the power.

The attorney-general? You’d get fairer treatment from the Ku Klux Klan at a Martin Luther King birthday party.

The government would probably say that we have nothing to fear if we’ve done nothing wrong. I would say that we’re treated as guilty until proven innocent.

I’m not saying that national security is not important. However, I can’t help think that if the government had more focus on doing good things – like embracing multiculturalism – then they wouldn’t face security problems because people would have no ill will.

Australia can be a great country – witness the help given to cyclone victims. Our government seems to have lost it’s way in the effort to promote wealth over health.

The technology to implement this covert surveillance doesn’t come cheap. Imagine if that money was used to help Australian Aboriginals get a fair go and some respect. How about funding hospitals? or educating the poor?

Perhaps you can visit the [Electronic Frontier Foundation](http://www.eff.org/) website. Join up and let them know. You could also email [John Howard](http://www.pm.gov.au/email.cfm) but you’d probably be incarcerated for expressing an opinon.