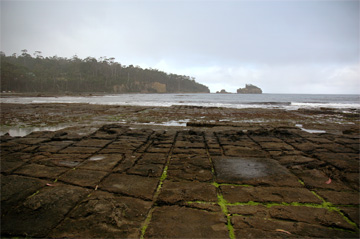 Another photo from Tasmania. The Tessellated Pavement at Eagle Hawk Neck.

> The Tessellated Pave is an inter-tidal platform where an unusual set of geological circumstances has resulted in a rare landform. Around 265 million years ago, a depression in the Earth’s surface was located in central-western Tasmania. Muddy sediments built up, sea ice or icebergs transported rocks into the basin and shellfish died and were preserved in the compacted sediment to form slitstone.

> From 160 million to 60 million years ago the flat-lying slitstone was cracked by stresses in the Earth’s crust. The resulting cracks (joints) are seen as three main sets, one aligned to the north-northeast, a second to east-northeast and the third to the north-northwest. This jointing, exaggerated by processes of erosion, has created the “tiled” appearance.

This particular formation is found in Pirate Bay.