Derek Trucks is one of the most talented guitarists around. I first heard him at the Eric Clapton concert in Melbourne a couple of years ago.

His style has evolved from blues to an eclectic mix. You can clearly hear influences from jazz, Latin, Eastern Indian and other world music.

The [Derek Trucks Band official site](http://www.derektrucks.com/news/derek-trucks-band-release-already-free) has more information about the album. 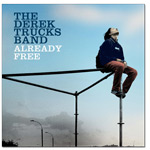 ← How Zack Snyder (Just Barely) Got ‘Watchmen’ to the Screen – ArtsBeat Blog – NYTimes.com Homework fun on an iPod touch →