The Eye and The Tower

Today’s mission was to visit the London Eye. I ended up going to the Tower of London as well.

I set out at about 11:00am this morning by train. The nearest station to the Soho flat is Leicester Square, then it’s a 4 minute ride to Waterloo station and a 5 minute walk from there to The London Eye.

Basically, the London Eye is a massive ferris wheel. Situated on the South Bank of the river Thames. Opposite the Houses of Parliament.

A breathtaking feat of design and engineering, passengers in the London Eye’s capsules can see up to 40 kilometres in all directions.

The height of the London Eye is 135m (equivalent to 64 red telephone boxes piled on top of each other) making it the fourth tallest structure in London after the BT Tower, Tower 42 and One Canada Square in Canary Wharf.

It really is amazing. It’s a landmark you can see from miles away. 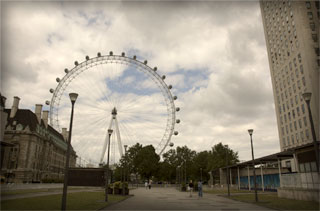 I arrived and bought tickets to the London Eye and a river cruise. I was in the queue for about 30 minutes and the “flight” (it’s really a ride but calling it a flight is not far off the mark) took about 30 minutes to complete. It was worth the wait. The movement is quite slow, giving you time to take in the view.

Then I took a London Eye river cruise. So named because the peer is right below the London Eye. It’s a 40 minute circular cruise down the Thames. It’s quite relaxing and the tour guide was great, mixing facts with funny remarks.

For example, when we passed under London Bridge, he said “They say that if you wave at people and they wave back, you’ll get 5 years good luck!”. So we all started waving ofcourse, and people did wave back. His comment was “You are a desperate lot aren’t you.” 🙂

The cruise took us past The Houses of Parliament, St. Paul’s Cathedral, The Tower of London, the Tate Modern Art Gallery, Shakespeare’s Globe Theatre and quite a few more sites.

After that, I jumped on a bus tour around London. It was amusing getting the ticket because the ticket sellers vie for your business like scalpers. Not very professional but funny. All part of the fun.

I couldn’t resist checking out the Tower of London. So I did a tour of that whilst I was out.

Founded nearly a millennium ago and expanded upon over the centuries since, the Tower of London has protected, housed, imprisoned and been for many the last sight they saw on Earth.

It has been the seat of British government and the living quarters of monarchs … the site of renown political intrigue, and the repository of the Crown Jewels … It has housed lions, bears, and (to this day) flightless ravens … not to mention notorious traitors and framed members of court, lords and ministers, clergymen and knights.

There’s a funny anecdote they tell you about the ravens – on the river cruise and on the Tower tour. The story goes that should the ravens ever leave “the Tower”, the monarchy will fall. So, they’re well fed and looked after and … with the typical British sense of fair play .. their wings are clipped. 😉 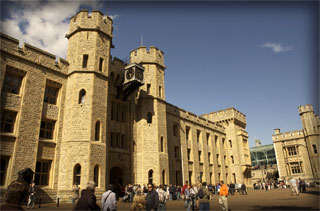 The Tower of London

I took more photos but didn’t have time to join the long queue to see the Crown Jewels. That will have to wait until next time.

The Tower Closes at about 5:00pm and it was that time when I had finished seeing what I wanted to see. I also refrained from seeing the torture chamber. After Arundel Castle, I’d had enough of that sort of thing. Look up the meaning of the phrase “Hanged, drawn and quartered” and you’ll get the gist.

So, I jumped back on the bus – the ticket is valid for 24 hours and you can hop on / off as many times as you like – and saw more of London.

It was about 7:00pm by the time I got back to Waterloo and I was famished.

So, walking along South Bank, I decided to treat myself and had dinner at Ozu Restaurant Japonais. I started with a mixture of Tempura vegetables and prawns, followed by some Salmon and Tuna sashimi. Washed down by Asahi beer and warm Saki. For dessert, I had Caramelised pear with Yuba leaves served with Yuzu sorbet. I tell you, the chef should be made a partner for that dessert alone!

They close at 10:00pm. Which was, interestingly around about the time I finished eating 🙂

So, I walked back to Waterloo station, got the train back to Leicester Square and staggered back up to the flat.

[ View photos of the London Eye ]