The Watchmen graphic novel includes a story-within-a-story called Tales of the Black Freighter. For a few reasons, Zak Snyder didn’t try to depict that in the upcoming Watchmen movie. However, he always planned to include it on a DVD release.

The blu-ray includes a Digital Copy. Have a look at this article on Ropes of Silicon. 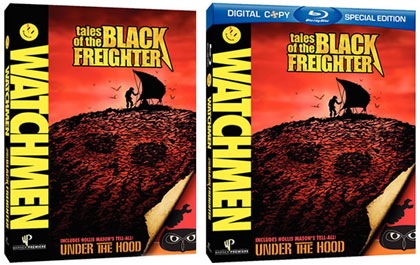 'Watchmen: Tales of the Black Freighter' DVD and Blu-ray Release

Â They’re in the book. And on this disc. From the director of Watchmen and 300 come two tales from the celebrated graphic novel that do not appear in the extraordinary Watchmen Theatrical Feature. Tales of the Black Freighter (featuring the voice of 300s Gerard Butler) brings to strikingly animated life the novels richly layered story-within-a-story, a daring pirate saga whose turbulent events may mirror those in the Watchmens world. Stars from the Watchmen movie team in the amazing live-action/CGI Under the Hood, based on Nite Owls powerful first-hand account of how the hooded adventurers came into existence. Two fan-essential stories. One place to watch the excitement. Watching the Watchmen begins here.

via: Ropes of Silicon